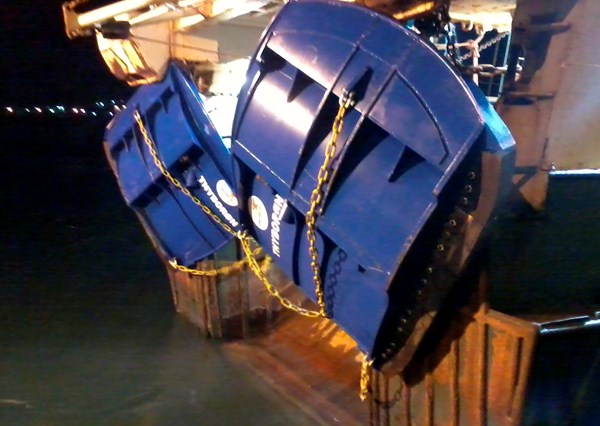 ‘These doors shoot away remarkably easily and start to square the gear the moment they’re in the water, unlike some door types that don’t start to be effective until they’re as much as twelve fathoms down. They’re also light to haul. We make a habit of always hauling at the same slow speed, and experience has shown us that this means the fish in the trawl get gentler treatment.’

We spoke to Snorri Snorrason on fresher trawler Klakkur at the end of the most recent trip. Klakkur’s owners bought a new pair of Thyborøn trawl doors from Hampidjan last April and he said that he has every reason to be delighted with them. These are Thyborøn T-16 Island doors with a surface area of 6.50 square metres and weighing3000kg each. The new doors were used for three trips in the spring before Klakkur switched to shrimp trawling and then to pelagic fishing for mackerel later in the summer. Klakkur has been back on groundfish since the end of August and in Snorri Snorrason’s opinion, the doors have worked perfectly.
‘The Thyborøn doors are lighter than the doors we were using before and the surface area is marginally larger, according to the manufacturer’s figures. The immediate advantage, which we noticed immediately, is that the doors square better and function as soon as they are in the water. We used 60 fathoms of bridle and that’s the distance I also like to see between the doors.Some skippers like a larger or a smaller spread between the doors and it varies by as much as six fathoms, but we keep a spread between the doors of between 58 and 63 fathoms,” Snorri Snorrason said, and added that there is a strong emphasis that the company places on landing the best possible quality fish. There is some extensive development work behind this, and the rule is to take no more than six to eight tonnes in a haul, and the haul back the gear gradually. With larger hauls or higher hauling speeds, there is a chance of blood spots in the fish. 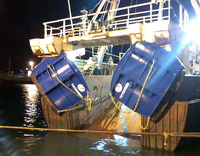 Sit comfortably and stay square
The latest technology also allows Snorri Snorrason to decide exactly where he wants the doors to sit during a tow.
‘Sometimes we have the doors on the bottom and the Thyborøn doors sit very comfortably like that. But if we’re towing on rough ground, then I lift the doors and they can be as much as ten fathoms above the sea bed. This works well if we’re working ground that is particularly uneven or very rocky. But it doesn’t seem to matter where the doors are, they always square beautifully and continue to do so all the way to the surface.’
‘I’ve always liked Thyborøn gear and never had better doors from anyone else. We have tried these with different back strop rigs, from one to three, but one back strop with two extra support chains seems to work best. That way the doors sit best. There are four angle of attack settings, but I’be stuck with the setting the doors were on when we got them. This gives the highest but one angle of attack, and we can reduce or increase this setting, although we have never used the lowest setting,’ he said, commenting that in spite of the long bout of poor weather, the catch rates are nothing to complain about.

Top fishing
‘There has been some excellent fishing from the Westfjords all the way east to Digranes. We were actually ten tonnes short of catching the last trip’s allocation, but that was a mistake on my part. In the previous trip we sailed on Monday night and were back the following Saturday at midday with 130 tonnes. That includes ten hours’s steaming each way, which shows how good the fishing has been,’ Snorri Snorrason said.