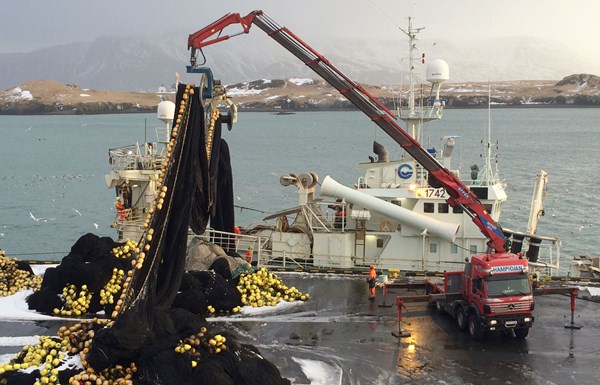 Staff at the Hampidjan net loft in Reykjavík have been busy these last few days now that the capelin season appears to be gathering pace.

A group of pelagic vessels are now fishing capelin in shallow purse seines on grounds east of Hornafjördur while others are hurriedly putting their deep gear ashore to take their shallow seines on board.

Faxi RE was alongside at Hampidjan’s Skarfagardur net loft this morning and according to skipper Albert Sveinsson, they started by putting ashore the 209 metre deep purse seine, the pelagic trawl, trawl doors early this morning and the boat’s 126 metre shallow was spooled into the net bin this afternoon. Yesterday Bjarni Ólafsson AK was alongside for just the same reasons and Ingunn AK shipped its shallow seine on Monday.

‘We store the fishing gear that we’re not using at Hampidjan and they overhaul the gear while it’s ashore,’ he said and commented that he expects the net loft to be a busy place now as the deep purse seine that was put ashore needs some repairs after that last trip.

‘We were on the Horn Bank and had a humpback whale inside the gear. It seems to have done some damage as the gear didn’t work as it ought to after we had managed to let it out of the seine. After that we were at Vopnafjördur on Sunday night to land 900 tonnes and that was followed by the 30 hour trip to Reykjavík.’

Albert Sveinsson said that he wasn’t sure how long it would take to reach the fishing grounds south of Hornafjördur.

‘The weather looks poor with heavy seas, certainly from Gardsskagi and east to the Westmann Islands. The southerly wind hasn’t died away yet, but the forecast looks favourable.

The forecast is for northerly winds for the next few days and that’s just what we’ll need along the east coast,’ he said.