Delighted with the new mackerel gear 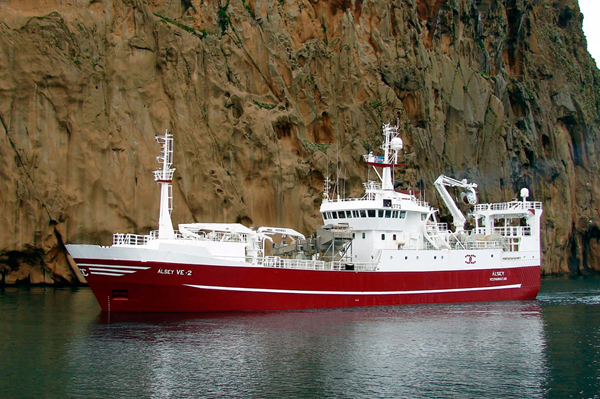 ‘We’re on the way to Greenland,’ said Jón Axelsson, skipper of pelagic vessel Álsey VE-2 after landing 450 tonnes of large, top-quality mackerel in Thórshöfn last week. ‘We caught this in only six hours fishing near the Westmann Islands.’ 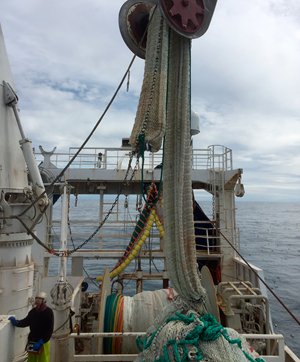 ‘The new 1440 metre Gloria XW self-spreading trawl with 60 metre sweeps and a 90 metre mackerel codend that Hampiðjan supplied us with in the spring has performed exceptionally well. We also took a 10 square metre pair of Bluestream Type 22VK doors from Thyborøn Trawldoor, and I’d say that this is the most successful set of fishing gear we have ever had on board,’ he said.

‘The gear works as if it was tailor-made for the ship and handles extremely well in every way. We control it very easily and we have been able to do practically anything with this, and the mackerel in the trawl mouth quickly finds its way back to the codend with no obstacles.’

‘There is a steady opening under the headline sonar with a 50 metre vertical opening and we get a spread of 130 metres. The trawl door spread is around 195-205 metres and that’s the trawl fully squared away. It won’t go any wider than that. We generally have 380 to 450 metres of warp out, which is a good length for keeping the trawl properly squared and open close to the surface.’

‘Taking a 60° turn is no great problem as the gear maintains a stable opening, even when one of the doors drops down to 40 metres and the other one remains steady at 10 metres under the surface, without affecting its catching efficiency,’ he said. 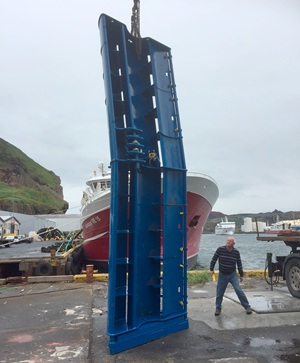 ‘We have a kite on the headline to keep the trawl at the surface, but we don’t have any floats or weights on the wing ends, as we don’t need them. The trawl squares away as soon as it hits the water. You can see clearly how well the self-spreading sections work in opening out the meshes and the net panels, especially in good weather and with a flat calm sea. I can certainly recommend the excellent Gloria XW trawl and the Blue stream Type 22VK doors from Hampiðjan,’ Jón Axelsson said.