Even sizes and better quality 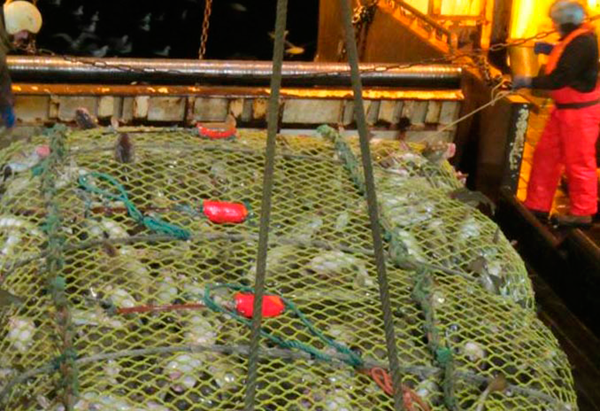 According to research into T90 codends for cod and QuickLine rigging

According to research carried out by fishery scientist Haraldur Einarsson into the selectivity of T90 codends rigged using Hampidjan’s Quicklines, the advantages are considerable when compared to conventional two-panel codends. The trials were conducted recently on board Helga María AK-16 when Haraldur Einarsson, two researcher from the Marine Research Institute and a Hampidjan technician joined the ship for a trip.

The results were presented at a meeting on the 30th of November. Haraldur Einarsson said that the QuickLine-rigged T90 codend was tested on ten areas off the Westfjords, plus there were three control hauls taken with conventional codends. The T90 codend is made in four panels, rigged on DynIce QuickLines and is made in T90 oriented 155mm netting. The control codend for comparison was made in standard 155mm mesh in two panels. A fine-mesh netting bag was used around the aft end of the codend to retain the fish that escape through the netting. Hampidjan has applied for patents on the supply and manufacture of this system and these patents are pending.

Haraldur Einarsson commented that he was satisfied with the results of the research.

‘This new codend incorporates virtually all of the improvements that are needed to improve selectivity, as well as quality. Production tells us that the fish caught in these codends is less bruised, although this is something that is not apparent at sea,’ he said and commented that it was noticeable that the bulk of undersized fish is released from the codend. 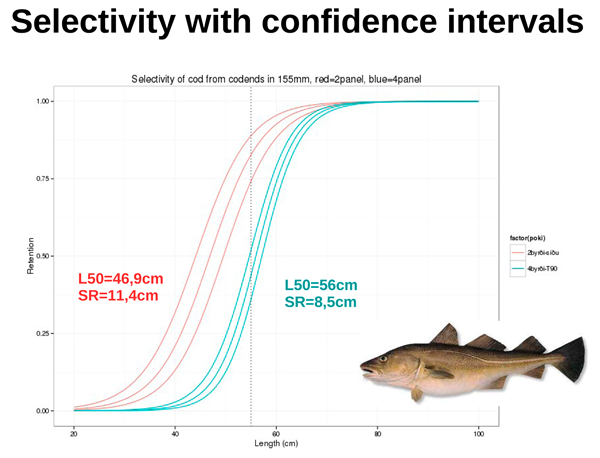 ‘Half of the cod that was just under 56cm long escaped through the meshes, and that proportion rose sharply for smaller grades of fish. But in a two-panel codend with the same meshes rigged conventionally allowed around half of 47cm fish to escape and there was considerably more small fish in that codend. Research in other countries indicates that the survival rates of cod and saithe that escape are high and even larger haddock survive if the escape takes place at fishing depth. Redfish are more delicate in terms of reactions to pressure variations but many other species that escape at fishing depths probably survive.’ According to Haraldur Einarsson, there is interest in running comparable trials on redfish grounds when there is an opportunity to do so, although the indications are that it would be better for this to use a 135mm mesh size, as has normally been used for redfish.

He commented that the co-operation between the concerned parties has been highly satisfactory.
‘In this kind of instance, everyone’s expertise is pulled together. The fishermen are familiar with the grounds and the fish behaviour, the fishing gear technologists add their experience and knowledge and finally there is my specialist knowledge as a fishery scientist. I feel that the approach that we took in this research has to be the best method of increasing the knowledge of everyone connected with it,‘ Haraldur Einarsson said.