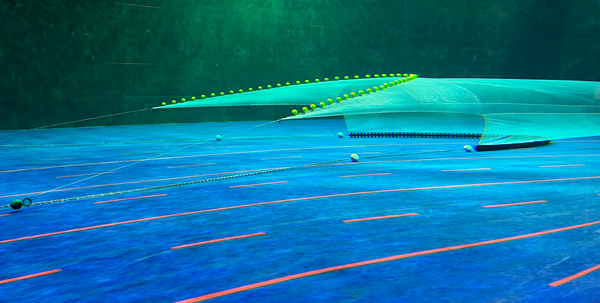 After a break of two years due to the Covid pandemic, it has at last been possible to reinstate Hampiðjan’s annual session at the flume tank in Hirtshals that took place at the beginning of this month. In the meantime, there had been a couple of visits to the Hirtshals and St Johns flume tanks for product development, which had been kept to a minimum number of participants – but the results of those research sessions were this month on display for a large group of visitors. 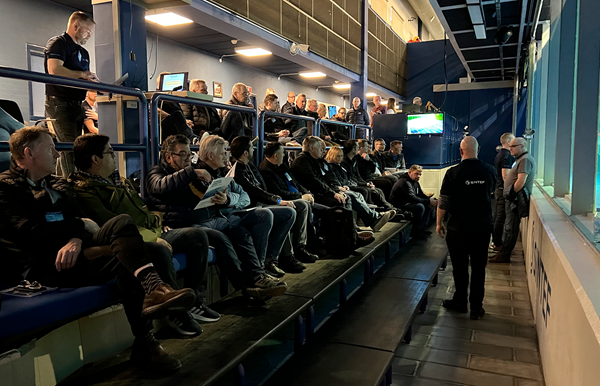 The majority came from Iceland, as well as others who came to Hirtshals from New Zealand, the USA and Chile. The trip to the tank was organised by Hampiðjan, along with Simrad’s Icelandic agent Simberg and Danish trawl door producer Thyborøn Trawldoor. The opportunity was also taken for a visit to the Karstensen shipyard in Skagen, which is a regular element of these trips as there never fails to be an interesting new vessel under construction at the yard. The finishing touches were being put to the new Isafold, and it sailed for its home port of Hirtshals two days later. 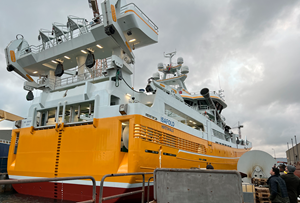 Hampiðjan Iceland’s managing director Jón Oddur Davíðsson describes the visit with customers to the North Sea Centre’s flume tank as a highly successful event. There have been similar trips organised by Hampiðjan for several decades, and these have been shown to provide the best opportunity for skippers and others to see exactly how fishing gear performs under realistic conditions and to observe the effects of a variety of alterations. 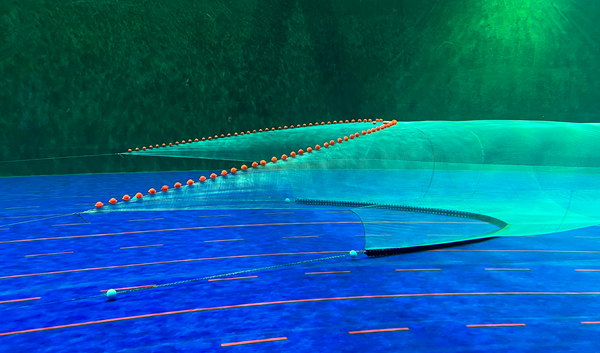 Among the demersal gears demonstrated at the tank were the H-toppur, Gulltoppur and Jagger designs, which are all bottom trawls used by Hampiðjan’s customers in Iceland.

The pelagic gears that performed in the tank were designs optimised for capelin, blue whiting, herring and mackerel. This trip was the first opportunity to demonstrate a new version capelin trawl and belly. Hampiðjan’s Gloria 2304 and 2432 blue whiting trawls were also streamed in the tank. Both of these designs became available in a revised version two years ago and have performed well recently. The Gloria 1760 mackerel trawl never fails to attract attention, and is in widespread use with pelagic vessels targeting mackerel. 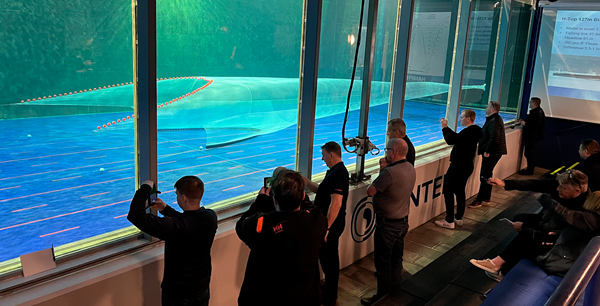 Jón Oddur Davíðsson reported that Thyborøn and Simrad held detailed presentations of their product lines alongside the tank demonstrations, and there’s no lack of exciting developments that have taken place at both companies over the last two years.

‘Thyborøn presented its latest trawl door developments, which includes the T26 semi-pelagic door for demersal trawling, but the star of the show was the controllable T32 trawl door. This is a patented device that uses a different approach to others on the market and it is more robust. It’s possible to set the towing depth of the door, the door spread and the surface area of each door from the wheelhouse control panel,’ he said.

‘There was a presentation of the possibilities offered by the Simrad TV80 and the FM90 multi-beam sonar, which offers higher-resolution imagery than has been seen before. There is a lot of development taking place at Simrad and some exciting innovations are appearing. 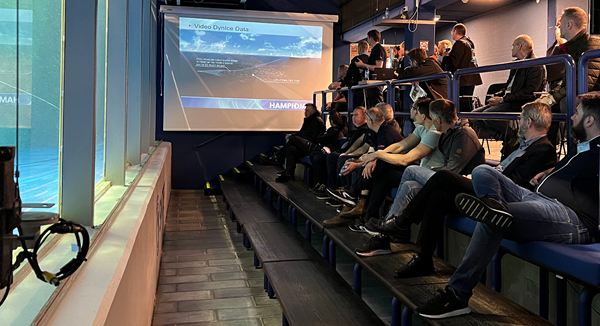 ‘The DynIce Data cable was also shown for the first time at the tank in Hirtshals, demonstrating how it performs in comparison to steel data cable. Even though the water flow in the tank is lower than real-time towing speeds, at only 1.80 knots, the striking difference between the two couldn’t be missed. The steel cable lay firmly on the floor of the tank while the DynIce Data cable immediately lifted off and hung right in the middle of the tank. There was no mistaking that this comparison attracted a great deal of attention, and we noticed that several of those present decided on the spot to switch to DynIce Data.

‘This trip was a particular pleasure, especially because it’s been such a long time since the last session, and you couldn’t miss seeing how cheerful and interested the participants were. These trips are important for us at Hampiðjan because this gives us a fantastic opportunity to get to know better the users of our gear, and to exchange information on how gear is used, as well as getting their feedback on what we have to show them. For skippers and vessel operators this is a unique opportunity to meet friends and colleagues and to get to know others in the business better, as well as to meet new people, which is also a key part of all this.’

The group of participants set off on a Tuesday, which made it possible to spend the whole of Wednesday and Thursday, plus part of Friday at the tank. Around half of the group travelled home on Friday or Saturday, while others opted to spend the weekend in Copenhagen with their families who had joined the trip to experience the city’s unique spirit as Christmas approaches.

‘The trip ended with Hampiðjan inviting participants to a traditional Christmas dinner of Danish roast duck with all the trimmings,’ said Jón Oddur Daviðsson – already looking forward to next year’s trip to Hirtshals.