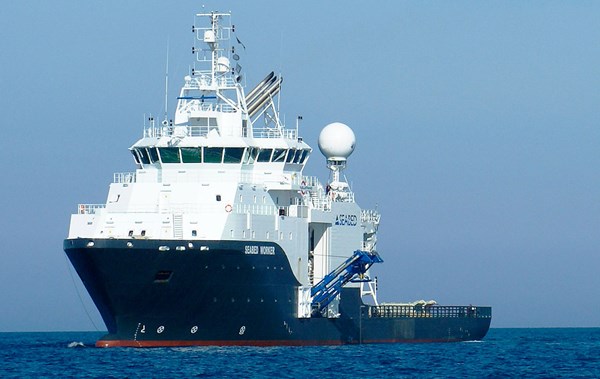 It’s 44 years since Neil Armstrong first stepped on the Moon to mark one of the most significant points in human history, and recently one of the motors of the Saturn V rocket that took him to the Moon was retrieved from the seabed at a depth of 4600 metres off Bermuda. It’s hardly a significant achievement compared to placing a man on the Moon itself on the 20th of July 1969, but only a few years ago it would have been unthinkable to lift such a heavy object from the seabed at such a depth.

The crew of Norwegian deep retrieval vessel Seabed Worker salvaged the Saturn V motor in March this year, using DynIce Warp rope 44 mm manufactured by Hampidjan Baltic in Lithuania. Specialist undersea equipment was used to attach the rope to the motor on the seabed.

Seabed Worker is owned by Swire Seabed, based in Bergen. The ship was built in 2009, and is specially designed for salvage operations at extreme depths. It measures 88 metres overall with a 16 metre beam and is equipped with 50 and 100 tonne cranes, as well as having accommodation for a crew of up to 66 on board. Among the ship’s other achievements, it has been used to salvage 1400 tonnes of copper from a sunken ship at a depth of 3200 metres and 48 tonnes of silver from a wreck at 4200 metres.

Hampidjan has twice supplied Seabed Worker with DynIce ropes. Originally the ship was supplied with a 4200 metre length, which was twice lengthened to bring it up to 5200 metres and the most recent delivery was 6300 metre long and 44 mm in diameter with breaking strength of 142 mT.

The reasons are straightforward enough, as at these depths it’s not possible to use steel wire rope as this would simply not be able to support its own weight over these extreme lengths. DynIce Warps are ropes designed for winch drums and they are eminently suitable for this kind of salvage work. The rope on Seabed Worker weighs 8.60 tonnes, compared to the 62 tonnes that a comparable length of steel wire rope would weigh. Even with the transport cradle and the reel, the weight is still only just over 12 tonnes and this is the heaviest rope that Hampidjan Baltic has produced so far in a single length. The reel measures 3.10 metres by 3 metres wide and the dimensions are dictated by transport regulations. In this case, the reel was transported on a low-loader with a ground clearance of only 15 centimetres, and the delivery trip from Lithuania to Bergen in Norway took three days. 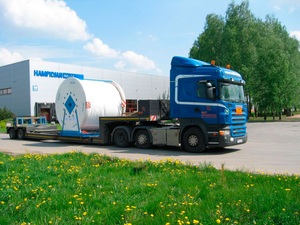 The new 44mm DynIce rope was produced over thirty days using the new braiding facility that was installed at the Hampidjan factory at Siauliai in Lithuania last year. Part of the production line is a 12-strand braiding machine that is the largest of its kind anywhere in the world, with additional components designed and manufactured by Hampidjan.

The new suite of equipment boosts Hampidjan’s production capacity significantly, also providing the capacity to produce much longer sections of DynIce rope in diameters of up to 200 mm in a seamless process.

The result is much better quality of ropes in extreme lengths without the need to join strands together during production. Without this new equipment and the improved production processes, it would not be possible to manufacture ropes of this size and diameter.