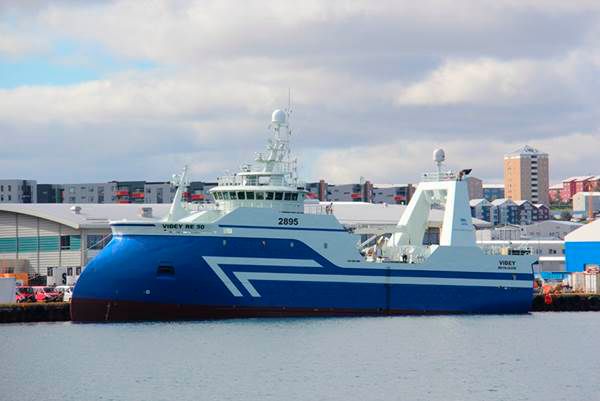 Brim’s fresher trawler Viðey docked in Reykjavík this week with 180 tonnes on board after a five-day trip to Westfjords fishing grounds. This was the first full trip after the installation of a third winch, enabling Viðey to tow two trawls side-by-side.

‘Previously we had a Jagger 88.8LW groundfish trawl from Hampiðjan that has performed exceptionally well, both in terms of catch efficiency and also with virtually no gilled fish and minimal routine maintenance. Now we’ve scaled down to a pair of 61.6 Jagger trawls, which fit right in to the twin-rig setup and are relatively light to tow compared to the larger trawl we were working before,’ said Viðey’s skipper Jóhannes Ellert Eiríksson, known as Elli, adding that they haven’t yet built up much experience of twin-rigging, having only completed a short shakedown trip off the south-west coast with technicians on board before heading for the Westfjords.

‘Overall, the trawls have performed well and I feel that this development is certainly promising. What I’m particularly pleased with is that the new trawl winch and the sweepline winches have fitted perfectly. It’s a real advantage that the new winches are from Naust Marine, as is the deck equipment system as a whole. That means that if we have any questions, we don’t have to go far to get quick answers.’ 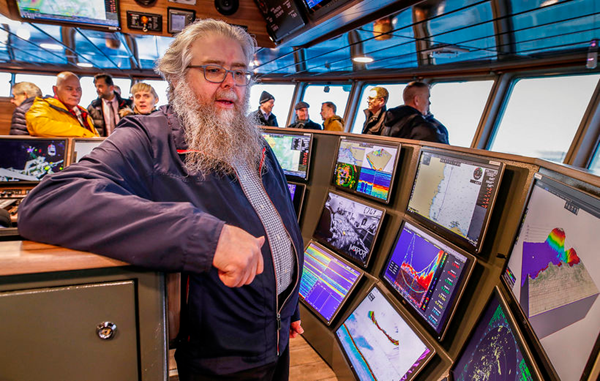 He commented that the refit is similar to the work that had already been done on board sister vessel Akurey earlier this year, and the reports from Akurey’s crew are that they are very satisfied with how this has turned out.

‘We’re using a pair of Thyborøn Type 14 doors, eight square metres and weighing 3800kg each. The technical team worked out the weight needed for the centre weight, and that’s five tonnes. We’re seeing an average 220 to 250 metres between the doors, working with 2x46 metre sweeplines, and when conditions are easier we extend these to 138 metres. The headline height is from four to six metres, and like the door spread, this depends on the state of the tide and where we’re fishing,’ said skipper Jóhannes Ellert Eiríksson, who is happy with his Jagger trawls.