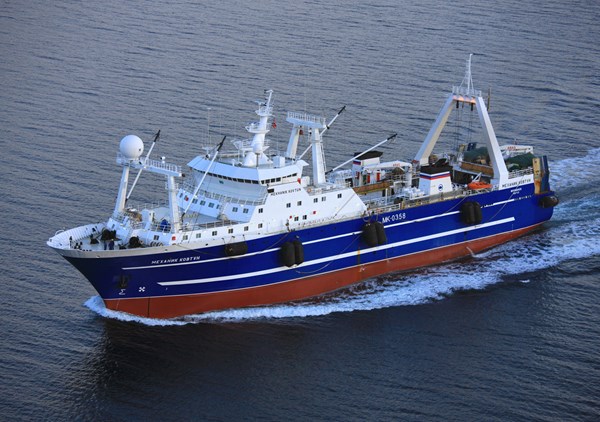 Hampiðjan technical adviser Sæmundur Árnason has spent three weeks at sea on board catcher-processor Mekhanik Kovtun to keep a close eye on the gear during the trawler’s first trip with a new set of gear for targeting mackerel.

The trawler is owned by Murmansk Trawl Fleet PJSC and was built in Vigo in 1994. It measures 105 metres overall and 7805gt, has a Wärtsilä 7940hp main engine and sails with a crew of 88.

‘We sailed from Rúnavík in the Faroe Islands on the 21st of June to find some mackerel in the international zone of the Barents Sea. This time we had on board a Gloria Helix 1760XW self-spreading trawl with 80 metre DynIce sweeplines and a new PE T90 codend. The doors for this trip were a 16 square metre pair of Thyborøn Type 15VF,’ Sæmundur Árnason said. 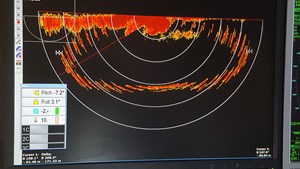 ‘We were catching mackerel mainly close to the surface using 490 to 550 metres of warp. This warp length gave us a door spread of 260 metres and 170 metres between the wing ends, with a vertical opening of 57 metres. We tried dropping the trawl down to 100 metres to see how it performed and were surprised by the results. The door spread increased to 290 metres and 180 metres between the wing ends, while the vertical opening hardly changed at around 55 metres. Even though the horizontal spread was that large, the trawl kept its shape, as you can see from the pictures.’ Sæmundur Árnason said. 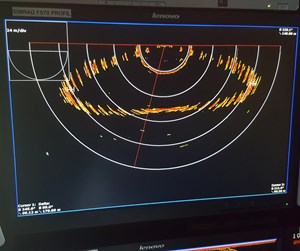 ‘During the trip we monitored the progress of the rest of the fleet on the same fishing grounds. Fishing with its Hampiðjan Gloria trawl, we saw that our results were as good as the others fishing around us and often significantly better. With a new pelagic trawl it always takes time to get it matched to the trawl doors, and the crew were quick to get the gear set up. This was no surprise with an experienced crew like this,’ he said. 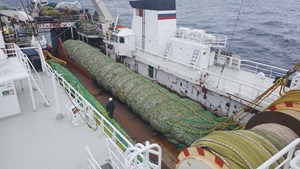 ‘In this trip we used a PE T90 codend with DynIce rib lines supplied by Hampiðjan, along with a conventional eight-panel codend that was on the ship’s other trawl. It was clear that the quality of the fish that came out of the T90 codend was much better than when the conventional eight-panel codend was in use, and Mekhanik Kovtun’s production manager was delighted with the quality, with much less damaged or bruised mackerel, which underscores the advantages of the T90 codend.

‘Hampiðjan would like to congratulate the owners and crew of Mekhanik Kovtun on their new fishing gear and T90 codend, and we would like to thank the skipper and crew for their co-operation,’ concluded Hampiðjan technical adviser Sæmundur Árnason.