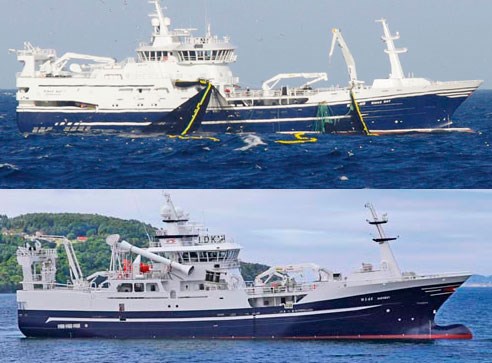 Orders for DynIce Warps and DynIce Data cables were finalised at the Nor-Fishing exhibition in Trondheim between 19th and 22nd of August when Norwegian operators of Harvest and Torbas all confirmed orders for the same package that was supplied to pelagic vessel Kings Bay earlier this year.

According to general manager for fishing gear sales Haraldur Árnason, these are the newest and most sophisticated vessels in the Norwegian fleet, all of them recently delivered or about to be completed.

‘Kings Bay was fitted out with DynIce Warps and a DynIce Data headline sounder cable at the beginning of this year and skipper and owner Björn Sævik said that they have been fishing very well, and he is satisfied with the way the DynIce gear has performed,’ he said, commenting that Harvest’s DynIce Warps and DynIce Data cable will be delivered this month. Torbas’s package will be delivered next month.

‘Three of these vessels have not used any DynIce gear before, while the old Harvest fished successfully with DynIce Warps for the last four years.’

‘Our first Norwegian customer for DynIce Warps was pelagic vessel Birkeland, which has now been using them for five years with great success. The skipper says they could last another five years, if not longer.’

Lasts five times as long
According to Haraldur Árnason, they now have eight years of experience in using DynIce Warps and the product has been in constant development all that time.

‘DynIce Warps have long proved their worth . They are much lighter than wire and also significantly stronger. The cost of DynIce Warps has fallen and they currently cost approximately three times the price of comparable wire, but have a working lifetime at least five times than that of wire,’ he said.