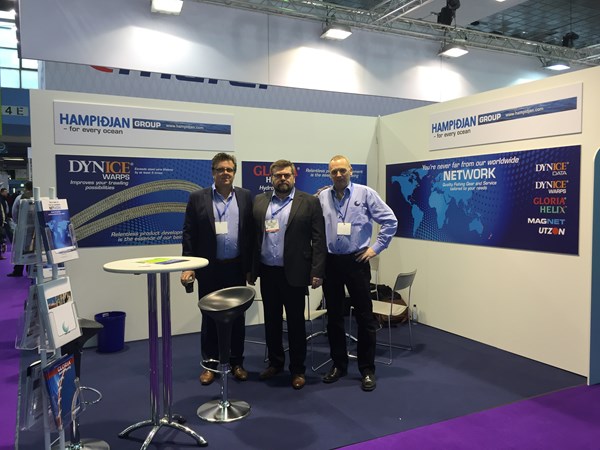 Hampiðjan’s staff have been working through the many enquiries they received during the company’s attendance at the International Seafood Exposition in Brussels from 26th to 28th of April. According to sales and marketing director Haraldur Árnason, it was a good exhibition and taking part in it was a worthwhile exercise that met all of their expectations.

‘This is the largest seafood event in Europe, held every year. Promote Iceland managed participation and promoted a new national stand that was both very successful and different to what we have seen in recent years, with a new flavour to it.’

The new 2280 and 2816 metre Gloria Helix mackerel trawls, the new Flipper doors from Thyborøn and the DynIce trawl warps attracted particular attention, plus we also were able to promote our expanding service network.

Shrimp gear from our partner company Cosmos Trawl was of interest to a lot of our visitors and these trawls have really hit the spot in the last few years with a large proportion of the north Atlantic shrimp fleet now using these very successful trawls.

Russian vessel operators were especially noticeable at the show and there is a lot of interest in Russia in fleet renewal. Hampiðjan has a long track record of co­operation with Russian companies and our business in Russia is growing steadily,’ Haraldur Árnason said.

In spite of a lower turnout of visitors at this year’s event following the recent terror attacks, we were able to meet all of the customers we had planned to talk to, plus there were plenty of new contacts that came out of taking part in the show.

This year Hampiðjan had a 15 square metre stand at the exhibition, manned by Haraldur Árnason and Guðbjartur Thórarinsson from the parent company in Iceland, as well as Sergey Karpliuk from Hampiðjan Russia and Thorleif Grønkjær from Cosmos Trawl in Denmark.

‘We would like to thank everyone who took the opportunity to pay us a visit, and we appreciate the great reception our stand received at the Brussels event,’ Haraldur Árnason said.