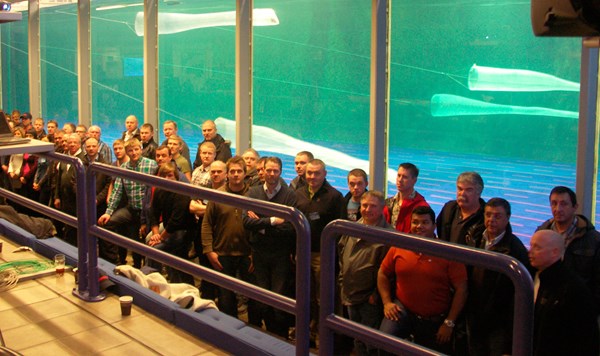 The annual visit with customers and fishing company representatives to the SINTEF flume tank at Hirtshals in Denmark has become a fixture on the Hampidjan calendar. It’s an opportunity to present new ideas and for a group of gear producers to demonstrate their products. This year 70 people took part in the trip to Hirtshals at the beginning of December. As well as those travelling from Iceland, guests from the Faroe Islands, Norway, Sweden, Finland, Denmark, Lithuania, Spain, Russia, Holland and the USA joined us. 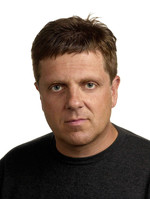 According to Hampidjan’s fishing gear division director Haraldur Árnason, this was a thoroughly successful trip, as in the past. The tank trip gives us an opportunity to meet customers and these trips frequently result in gear innovations or alterations to existing gears.
‘This time we also hosted lectures on innovations in fishing gears and the materials used to make them, as well as a few ideas on what to expect in the coming years. A representative of Dutch manufacturer DSM, which produces the Dyneema fibres we use for making Hampidjan’s Dynice super-ropes, presented a lecture on the company and the future of super strong materials in fisheries applications. A representative of Thyborøn Trawl Doors was also present and described the progress the company has made in developing trawl door technology. Simrad also took part and made a fascinating presentation on the company’s work on developing fishfinder technology,’ he said, adding that the notable innovations presented included the new mackerel trawl, the use of flying pelagic doors with bottom trawls and the development of Dynice Warps.
‘The new mackerel trawl and new ideas in bottom trawls attracted a lot of interest. The development of flying doors with groundfish trawls deserved plenty of interest. It’s a method of fishing that has spread across the world and it performs better and with lower fuel costs than conventional trawling. Using Dynice Warps as part of a package was clearly something that people were interested in. We now have around a hundred customers using Dynice Warps and they are all in agreement that there is no doubt that there are huge advantages in using these warps compared to conventional steel wire warps. We also demonstrated Nylex ropes and Helix self-spreading ropes for pelagic gears, demonstrating just how effective this self-spreading technology is. The comparison sparked quite a debate among our guests, and we feel that we put our money on the right horse here, as around 80% of Hampidjan trawls today are made with Helix self-spreading ropes,’ Haraldur Árnason said.
‘These trips bring people together and they often result in some good ideas. The tank trips often bring together skippers who have known each other for years over the VHF but who have never before met in person, and they finally get to see the face behind the voice. We’d like to thank our guests on this latest tank trip to Hirtshals for their excellent company,’ he said. 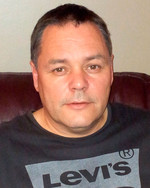 Ninth tank trip with company skippers
Einar Bjargmundsson of HB Grandi knows a thing or two about fishing gear, as he is the man responsible for the gear on the company’s fleet. This year he took part in the Hampidjan tank trip for the ninth time with a group of HB Grandi skippers and fishing division directors, and commented that as always, it was a worthwhile trip.
‘We took a look at the pelagic trawl that Ottó N Thorláksson RE is being fitted out with in January. We’re hoping that this gear will give us larger saithe and that it will also perform well when the redfish sit higher in the water column. The trawl looks good and the skipper is looking forward to trying it out,’ he said.

He commented that trials have been carried out on board Sturlaugur H Bödvarsson AK with a four-panel codend in 155mm T90 netting with skipper Eiríkur Jónsson taking a prominent role in the testing.
‘The thinking behind this is to get better and larger fish and to be able to avoid having to use a selectivity grid that doesn’t treat the fish well. There has been some excellent co-operation between us, Hampidjan and the Marine Research Institute on this. The codend has been tested in the tank and we made some changes there that will undoubtedly turn out to be improvements, and I hope that we’ll have some concrete results from this latest version by February. If this works as we hope it will do, then there’s no reason why we shouldn’t be rigging all of HB Grandi’s gear with these codends.’

Einar Bjargmundsson said that there are great expectations of the new mackerel trawl in its Gloria 1760 Super Wide configuration that gives a wing-end spread of 215 metres. The older version as used by HB Grandi’s trawlers has a 160 metre spread.
‘This trawl has the same vertical opening as the one we are using today and we hope that by increasing the spread we can be sure of getting catches of clean mackerel,’ he said.