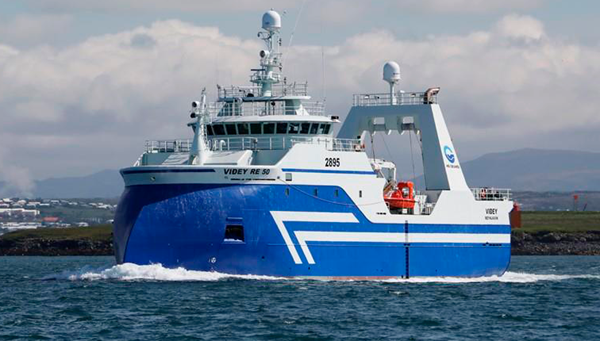 When he was ashore just after New Year, we spoke to Kristján E. Gíslason, who skippers Viðey RE-50 opposite Jóhannes Ellert Eiríksson, to ask about the outstanding success they and their crew have achieved as Iceland’s top-catching fresher trawler for 2021, having landed 10,347 tonnes over the year with a catch value of ISK2.1 billion.

‘We did very well last year, with an average of 172 tonnes for each of the 60 trips. Behind this success are of course a fantastic high-tech ship, which is owned by the fishing company Brim hf in Reykjavík, a great crew and well-designed, strong, enduring fishing gear from Hampiðjan. We have an 88.80 metre Jagger demersal trawl, with a pair of 8 square metre Thyborøn Type 14 doors that each weight 3800kg and which square this trawl very well. When we’re twin-rigging we use a pair of 61.60 metre Jagger trawls, with the same doors and a 5300kg centre weight on the middle warp,’ he said. 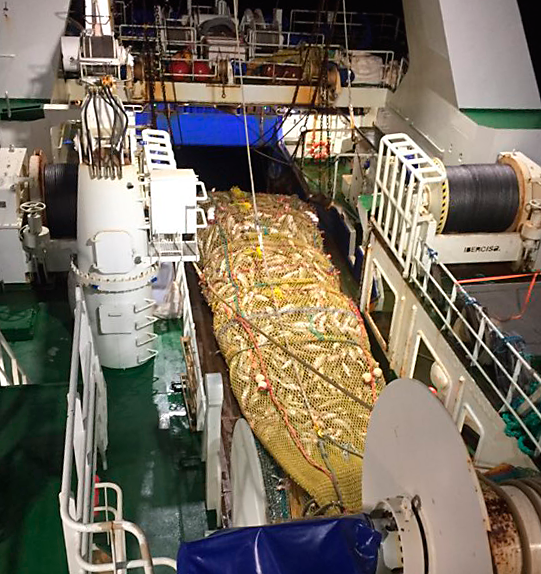 ‘The Jagger trawl that Hampiðjan fishing gear technologist Vernharður Hafliðason and I have developed over the last few years has performed exceptionally well. Our Jagger is light to tow, doesn’t pick up much damage, and it sticks to the seabed like a bloodhound. These qualities are in part due to the choice of materials. We have large mesh in the forward sections and extremely strong 2.50mm Advant netting in the square, top sheet and most of the bottom sheet. After that we have a tunnel and codend made in 6.20mm Magnet Yellow netting, all rigged on DynIce QuickLines, attached at the fore end with four braces and a lazy deckie. The high strength of the 6.20mm Magnet Yellow means that we can bring each haul up, spooling the lazy deckie onto the drum without having to worry about the belly or the codend giving way under the tension,’ he said.

‘Vernharður Hafliðason and I have checked the Jagger carefully, both in the flume tank and using Hampiðjan’s GoPro cameras. The footage shows how well the netting in the forward section opens and is evenly tensioned. We also saw the unbelievable efforts that cod make to escape through the gaps between the rockhopper discs. After seeing those circus tricks, we reduced the gaps and made the hoppers heavier. That change resulted in a clear improvement in catches. We now tow our 88.80 metre Jagger on a seven-tonne rockhopper footrope, 29 metres long and with a 66kg per metre weight in the water.’

‘We have something of a unique setup for the sweeplines of our trawls. We can switch at a moment’s notice between two sweepline lengths before shooting away, and we have added the third option of extra-short sweeplines that can be rigged with little effort. That allows us to maintain the ideal trawl mouth spread and to choose the best sweepline rig for for the depth and seabed conditions. We can choose between 50 and 72 fathom sweeps for the big trawl, and 36-47 and 69 fathom sweeps for the smaller trawl pair,’ he said.

‘The Thyborøn doors are exceptionally strong and long-lasting, and they can last us from 18 to 24 months. The doors are completely maintenance-free, apart from regularly replacing the aft two shoes. They are always stable and stay steady under all towing conditions. I spent some time adjusting the rigging to begin with, adjusting the towing point and making alterations to the backstrops until they leaned slightly inwards and lifted a little at the leading edge. We have been using this rigging for out Type 14 doors now for around six years.’

‘The Thyborøn doors and Jagger trawls have served us extremely well, and they undoubtedly play a large part in the success that we achieved last year,’ Kristján E Gíslason said.