Warps spooled perfectly – for the first time ever 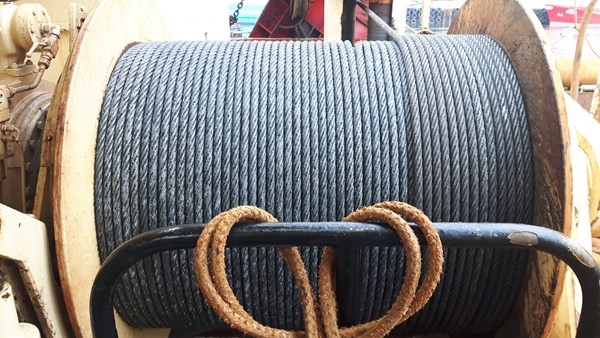 ‘This is a vital piece of equipment and I don’t understand how we managed before,’ said Jón Valgeirsson, skipper of Westmann Islands trawler Bergey VE 544.

‘We’ve taken new warps on board hundreds of time before, but this is the first time they have been spooled exactly right onto the drums. It makes a huge difference and everything has worked perfectly.’

Prior to Bergey’s most recent trip, new warps were spooled onto its drums. The new wire was supplied by Hampiðjan’s Westmann Islands branch, and this time they were spooled on board under load using the tensioning machine that Hampiðjan has installed in the port area. This is the first wire tensioning machine of its kind in Iceland, but according to branch manager Ingi Freyr Ágústsson, a similar piece of equipment has been in use by Cosmos Trawl, Hampiðjan’s partner company in Denmark for the last year with excellent results.

‘We concreted a base for the machine here on the dock. By threading the wire through the wire tensioning machine, we can set resistance to a fixed level, so that warps are spooled on board trawlers’ drums under a load. For smaller trawlers such as Bergey, a load tension of four to eight tonnes is suitable, and for larger trawlers we can set the tension higher,’ Ingi Freyr Ágústsson said.

According to skipper Jón Valgeirsson, up to now, trawl warps have been tensioned at sea by spooling them in by hanging heavy chains on the other end, but this has never been fully satisfactory.

‘It’s always possible to tension them to an extent in flat calm weather, although it never works out as well as we would like. It’s only now that we are seeing 100% perfect spooling onto the drums and I would never have believed this if I hadn’t seen it for myself,’ he said.