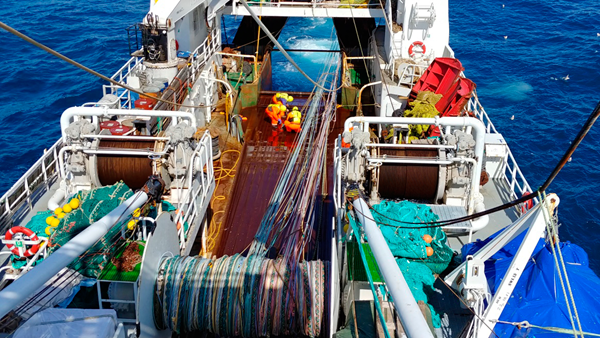 ‘This all worked out very well. The Russian crew were quick to get to grips with the fishing gear. My role was to assist in familiarising the crew with the gear and that went without a hitch. As usual, the doors needed some adjustment, but once that had been done everything worked perfectly and we soon hit some good fishing,’ said Hampiðjan’s fishing gear sales manager Sæmundur Árnason, who spent almost three weeks at sea with Russian trawler Rybak.

Rybak’s operating company had invested in a 2560 metre Gloria pelagic trawl for redfish and are using it with a pair of 3400kg, 13 square metre Thyborøn Type 15 doors. Sæmundur’s role during the trip was to advise on how to handle the new fishing gear, and this was done successfully. 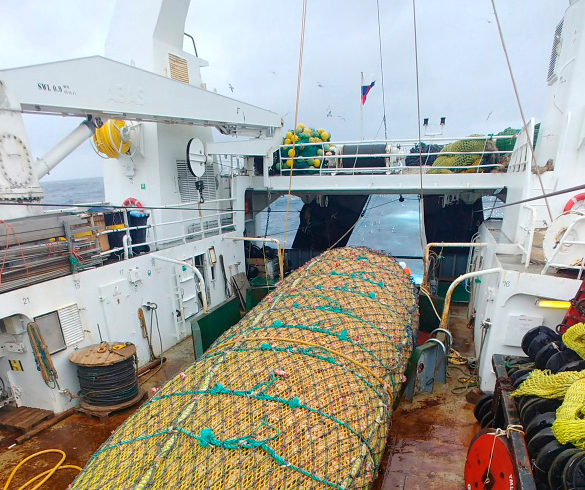 ‘We started fishing on a patch 20 to 30 nautical miles west of the EEZ limit and there had been some good fishing there for a few days. We managed four good days with two to three tonnes per towing hour.

Then the weather picked up which stopped us fishing while the storm lasted and after it had blown itself out we were getting 1.5 to 2 tonnes per towing hour.

Altogether we spent ten days west of the EEZ line, and now the fishing is tight to the line.

Outside the line are the foreign trawlers, mainly from Russia, but with a some from Germany, Norway and Spain there. Inside the line are Örfirisey, Vigri and Arnar,’ he said, adding up around twenty trawlers fishing around the 200-mile line. 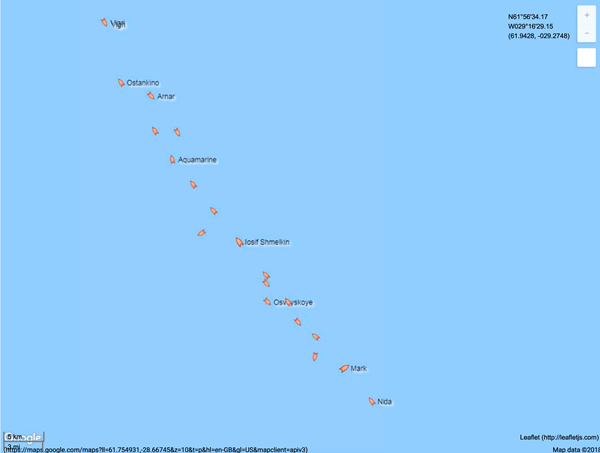 ‘All of these trawlers are using Hampiðjan’s Gloria redfish trawls, which demonstrates the position that this gear has on the market.’
Although the catch is referred to as deep sea redfish, the redfish caught on the Reykjanes Ridge close to the EEZ limit is in fact clean deep redfish.

‘It’s very good quality fish. We were fishing mainly between 300 and 450 fathoms and the catch was pure deep redfish. The genuine deep sea redfish is caught closer to the surface and not until later in the summer, if the quota lasts that long. The Icelandic quota for this year is 2019 tonnes and this has been cut significantly in recent years,’ Sæmundur Árnason said.