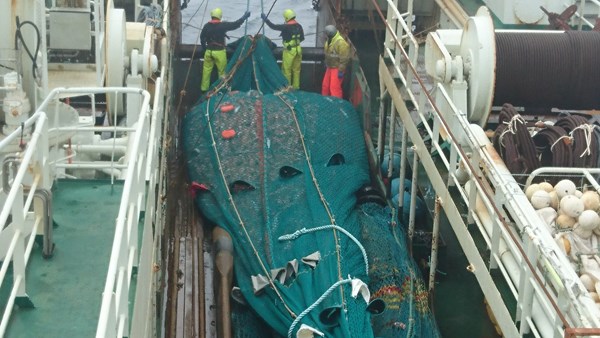 The ongoing co-operation between the Institute of Marine Research, HB Grandi and Hampiðjan into the effectiveness of T90 codends  rigged on QuickLines continued this spring. A codend in shrimp mesh sizes was assessed in the flume tank in Canada in association with the Fisheries and Marine Institute of Memorial University of Newfoundland.

According to Haraldur Arnar Einarsson at the Institute of Marine Research the assessment compared the efficiency of diamond and T90 mesh codends. A significant difference was found, with the T90 codend showing a substantially better opening and water flow. Short and long bellies were also tested with these codends, and the type of belly appears to make little difference to the T90 codend, while the conventional codend had a lower water flow when towed behind a long belly.

‘In May we joined skipper Heimir Guðbjörnsson and his crew on fresher trawler Helga María AK-16 for a trip to assess the effectiveness of a four-panel T90 codend rigged on DynIce QuickLines. This trip was in association with the Institute of Marine Research, Hampiðjan and the Memorial University of Newfoundland. Hampiðjan supplied the four-panel T90 redfish codend in 110mm mesh, made in double 6mm PE netting. A 50mm covernet was used to collect the fish that escaped from the codend at fishing depths,’ Haraldur Arnar Einarsson said, and commented that the results showed that the T90 codend in 110mm mesh separated out more efficiently than the two-panel 135mm diamond mesh codend.
A sufficient number of hauls were taken to ensure a reliable set of results.
‘The conclusion was that this codend showed a 7.3cm better effectiveness in measuring golden redfish (Sebastes marinus) than the codend that had been measured previously under the same conditions, which was a conventional redfish codend made in 135mm diamond mesh. Although more small redfish were released from the T90 codend, it was also shown to retain more of the over the 33cm reference size. The reason is that the selectivity index line rises much more sharply with a T90 codend. It was also clear that there were fewer variations between tows with the new codend compared to the conventional gear, also there were still variations, especially with the smallest redfish sizes. This can be seen clearly on the graph where the shaded area shows where the error margins lie. 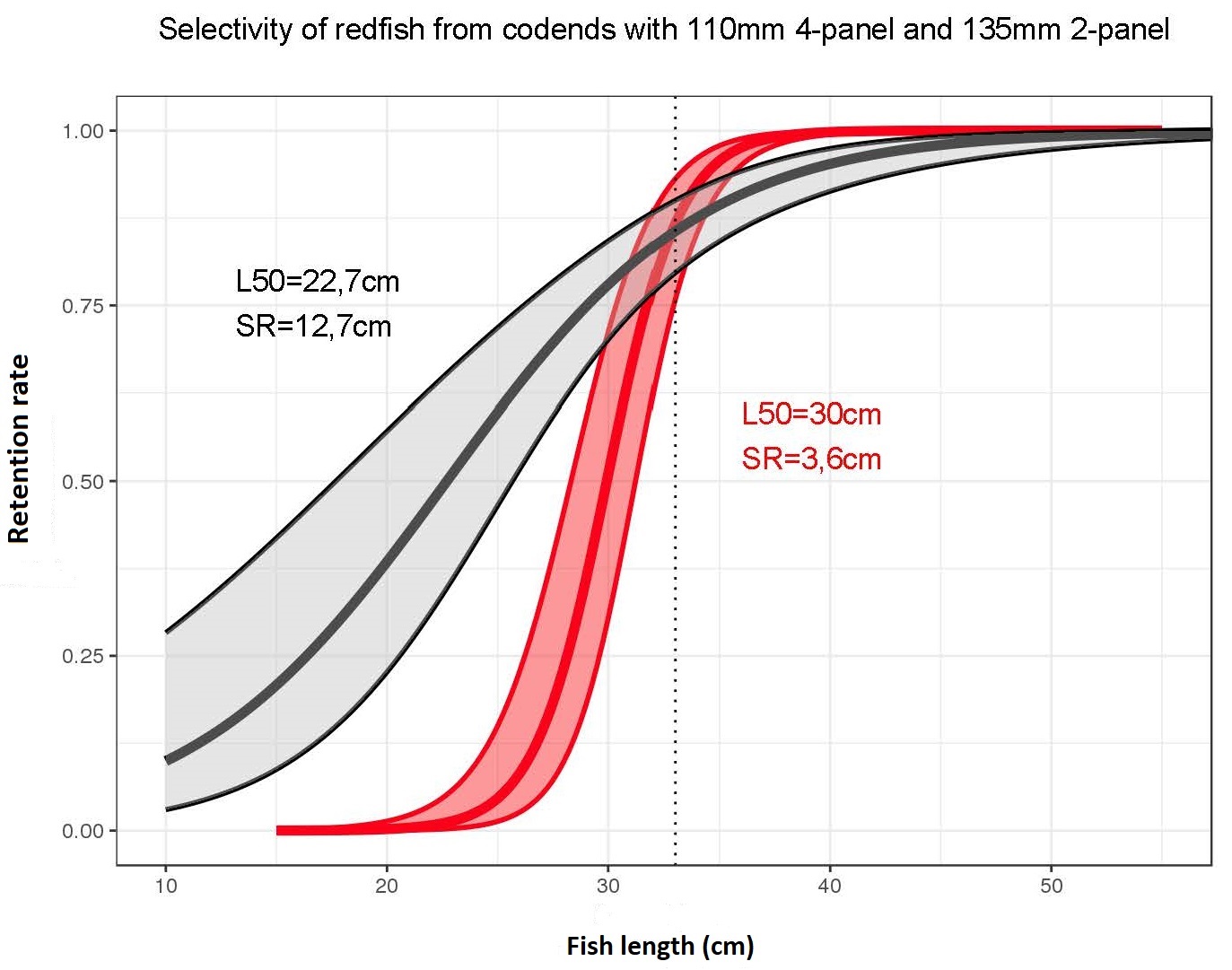 The graph shows the selective capacity of the 110mm T90 codend (in red) and the conventional diamond mesh codend (black). The dotted line indicates the 33cm index length for redfish. The T90 codend is more efficient at separating out small redfish and retains redfish over the 33cm size more efficiently.
There is some difference in measurement variability, chiefly in measurements with conventional codends. The selectivity length for redfish (where the line coincides with the 50% proportion) is 30cm, compared to 22.7cm for the conventional codend. There are some differences in the margins for error (the shaded areas).

Is this a codend suitable for fishing redfish?

‘The indications are that this codend separates out small redfish and other small fish more efficiently that the old codend, in spite of the smaller mesh size. It hasn’t been fully confirmed, but it appears that the majority of redfish that escape do so at the trawl depth. This is mainly little redfish (Sebastes viviparus) which is not a commercial species and which is often discarded dead. There are clear arguments in favour of this codend as a being an improvement in respect of the way marine resources are treated. On the other hand, there are as many gilled fish with this codend as with the old one. Redfish that are gilled are often damaged and even useless commercially. There are indications that the majority of gilled redfish in the 110mm codend are in a different size range to those gilled in a 135mm codend. This is something that needs to be examined and is fairly easy to measure. There are also other ideas in development that can be tried out to reduce the number of gilled fish,’ Haraldur Arnar Einarsson said. 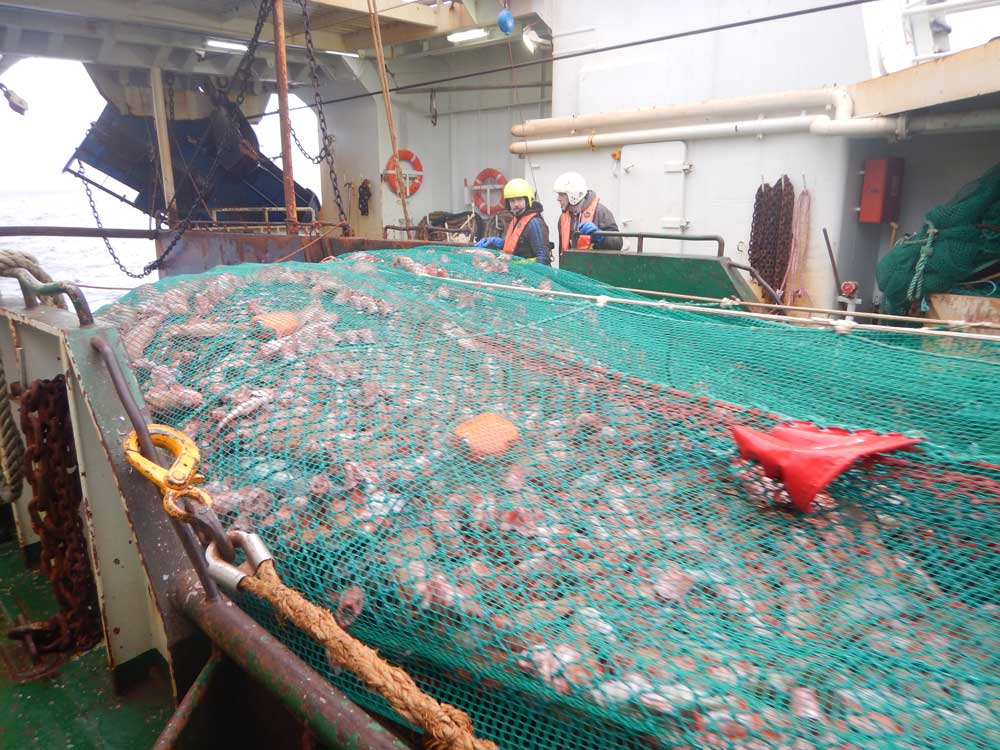 HB Grandi has had a derogation to test this one codend made to these specifications so as to collect data, both for visual information and to assess gilled fish numbers, as well as the find out how well the codend performs in general for catching redfish. In a few months we can expect to have more information on the value of this codend, allowing decisions to be made regarding its further use. 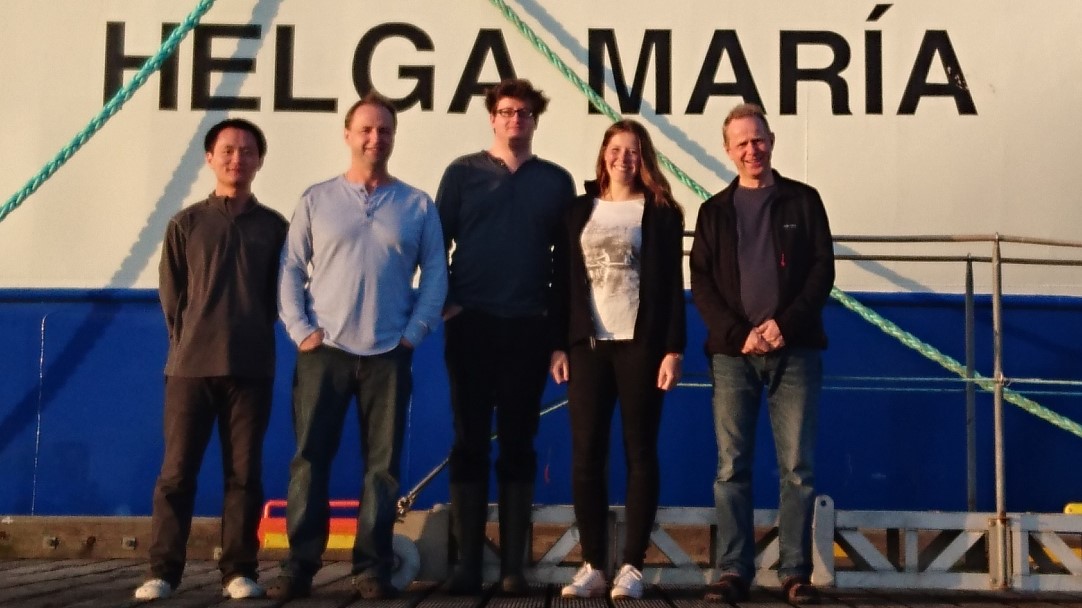 The research team, from left: