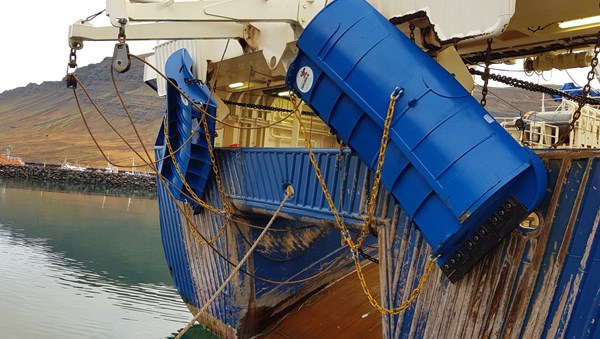 A new semi-pelagic trawl door design from Danish producer Thyborøn Trawldoor looks highly promising. The new Bluestream Type 23 doors have been developed based on the company’s experience with its Type 14 doors. These powerful doors are predicted to result in significant fuel savings when demersal fishing, with no drop in catch rates.

Hampiðjan’s Kristinn Gestsson, a man with a reputation of his own in the wheelhouse, joined trawler Kaldbakur recently for a trial trip with the new doors to give them their initial baptism under Icelandic conditions. He reported that the results took both him and the crew by surprise.

‘These Bluestream doors are incredibly powerful. Kaldbakur had been using Type 14 doors and fished well with them. Those are 7.5 square metre doors, and the new pair we tried out are a whole metre smaller at 6.5 square metres and weighing 3800kg. The rule of thumb is that the door spread at a reasonable trawl depth is roughly the length of the sweeps, and that fits with their experience of the Type 14 doors. The sweepline length was 137 metres and the door spread was the same. 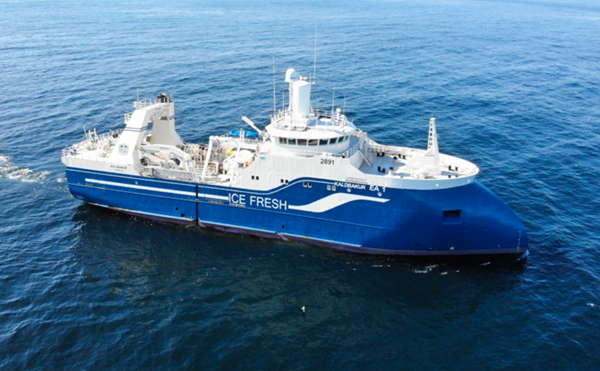 By switching over to the Type 23 doors, the spread jumped to 148 metres. That was towing at a depth of 200 metres and the doors were from two to seven metres off the bottom.’
According to Kristinn, there are no figures yet from the company on fuel consumption for the trip, but the engineers on board said that they immediately saw a significant improvement.

‘We could have gone a step further and tried the 6 square metre doors but after discussions between Kaldbakur’s owners, the skipper and Thyborøn, the decision was to try out this size of trawl door, as we are convinced that the door size can be reduced further compared to this size of trawl, and that will yield further dividends’ Kristinn said, commenting that the trip as a whole had been a successful one. 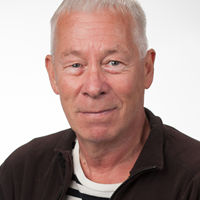 ‘We were off the east coast the whole time. We started fishing in bad weather in the Berufjörður Gully and had 50 tonnes of redfish and some saithe. Then we had 130 tonnes of cod on the Fæti grounds over the rest of the trip. The catch was 200 tonnes  after six days  at sea,’ Kristinn Gestsson said.